A few weeks ago, Ropsie showed you guys how she transformed her old french notes to new digital ones. She planned to type out the scanned handouts in the notes but she’s not done it for weeks. So, I thought to do it for her.

To avoid typing the notes, I looked for a solution that could save me some time. I thought to convert them to text and then edit a few errors instead. First, I exported the scans, out of Notability, as images. The app zipped the 5 images, forcing me to save them to Files for unzipping. I then saved them to Photos so I could use them from there because it’s easier (and faster) to work with photos from the Photos Library. Now, I was ready to extract the text from these images.

The app I tried first was CollaNote because it’s free and therefore accessible for anyone to try out. Unfortunately, the app could not recognise any text on the image I tried first. With the other pages, I tried late on, the app recognised the topic on one and a few sentences on others. So, CollaNote didn’t work for what I needed.

I went on to try Scanner Pro. It managed to extract text from the whole page, which was a huge upgrade, coming from CollaNote. However, it had a lot of errors which pushed me to try another app. Since I don’t speak French and I felt, the fewer errors the transcription the better.

I tried my luck with Live Text. It picked up most of the text on the page, except for numbers 9 and 10. To appreciate its accuracy, I copied everything to past in Craft. The extraction from Live Text also had a few errors that I could pick right away. In a desperate attempt to get a more accurate extraction, I turned to Google Keep.

I chose to use Craft for editing these notes. It is a styled text note-taking app for the Mac and iPad. They are currently working on making it available on the web too.

To work faster, I switched to my MacBook. Before checking the spellings, I tried to rearrange the notes to resemble what they look like on the handout. Craft doesn’t underline your text, unbelievable! Let’s hope our developers can add that feature. I resorted to making the text bold but it’s not quite the same.

Once I had finished checking for errors and editing the text, I styled the notes following Ropsie’s style. I noticed all her French sentences are pink, so I kept that colour code.

I had to type three of the 5 pages. Their structure made it difficult to extract and use the text. The pages didn’t have a lot of notes, it wasn’t bad at all. Craft had a few limitations that meant the notes I created didn’t look exactly like the ones in the scans:

Overall, compared to other word processing apps, Craft is much simpler to use. Especially if you want to add some basic and quick styles.

Craft doesn’t show you where your pages begin or where they end, which can cause problems when exporting your notes. When exporting the Regular font size, some of the notes became two pages. I had to make the text smaller.

To make sure the notes all fit on one page, I exported each of the five pages one by one. Then I airdropped them to Ropsie’s iPad for some final touches.

There are some notes I couldn’t add in Craft because the app didn’t have the feature I needed or I ran out of space on the page. I added those in Notability and also underlined some words that I couldn’t in Craft. Ropsie created her notes in Notability, that is why I had to do all this in the app.

One of the pages had a lot of handwritten notes. Google Keep had no trouble converting the handwriting to text. From the image! That was very impressive! In case she’ll want the notes handwritten notes, she’ll probably use sticky notes to cover the text. I made the questions look different from the answers, though. Hope that’ll be enough.

I have done my best to make these look better than the scans in her notes. It’s easier to interact with text than scans. I know how Ropsie is obsessed with her notes, so I didn’t delete the scans, in case she doesn’t like the new notes. In the worst case, she’ll just delete my version.

This whole process took me about five hours, give or take. Mostly because I had to record the whole process. The scanning and editing itself took a few minutes per page, which is great. 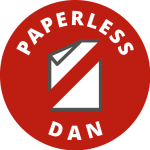 I write about digital workflows and comprehensive, simple to-dos to help you on your digital transformation journey. In my spare time, I like to cook, take walks and research about different technologies.

Any thoughts? Do tell, do tell! Cancel reply